Courtney and Mimi Pullen were looking for a philanthropic project that they could do with their family, which includes five teenage kids.

In 2010, Courtney and Mimi visited Puebla and IPODERAC on one of ICF's Day of the Dead trips.  When they returned, their enthusiasm carried over to their children and they vowed to return the following summer and bring their children with them.  So, in July of this year, Mimi, Courtney, and their five kids, ages 14 to 20, spent a week at IPODERAC.

ICF worked with the family to develop a service trip for the entire family.  Courtney, a psychologist, was to begin a curriculum that addressed sexual abuse in the lives of the boys and how to help them heal.  The rest of the family would be involved in the "spring cleaning" of IPODERAC.

Courtney began his work with a 3-hour inservice workshop with the educators.  He described the aspects of abuse, what is normal, and who are the predators and who are the victims.  During the frank discussion that followed, he discovered that there is a lot of work that still needs to be done in this area.  The Pullen family has arranged for and funded ongoing counseling from a professional from Mexico City to continue working with the boys.

Mimi and the rest of the family contributed by doing a thorough cleaning of the kitchen, raking, planting cacti, and doing "tons" of weeding.  They played soccer every day with the boys and even taught them how to make beaded hemp bracelets.  For the 4th of July, they helped make a traditional holiday lunch of chicken drumsticks, potato salad, and corn.

The results for the Pullen family were wonderful.  Although the Pullen kids spent a lot of their vacation working, they became really attached to the boys and want to return next year.  In fact, they have already saved $1,700 to return next summer.  They are constantly thinking of ways to save money and are making sacrifices such as giving up new clothes or going out to eat as a family.  As Mimi said, "Their hearts are so invested."  They loved being with the boys.  After the visit they understand how hard life has been for the boys and how much easier they have had it and want to do what they can to help.

Can ICF help your family have a similar experience? 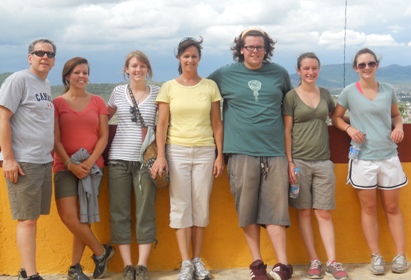