When I told people I was going to Mexico, there were two responses: “Which beach?” since my standard vacation preference usually involved sand, or concerns over the recent violence in the border and tourist towns. The city of Atlixco was fortunately far from all of this and gave me a completely different perspective of Mexico and its culture.

The main purpose of my trip was to visit IPODERAC, a home for boys who were either living on the street or in compromised home situations. IPODERAC is a prime example of a successful non-profit business model of sustainability with 70% of their revenue coming from products such as soap, cheese, and wood projects. For example, the boys learn to help raise and take care of the goats on the property that provide milk for the soap workshop, the soap is then sold and the profits are returned to IPODERAC to help the boys. Through my work at Colorado State 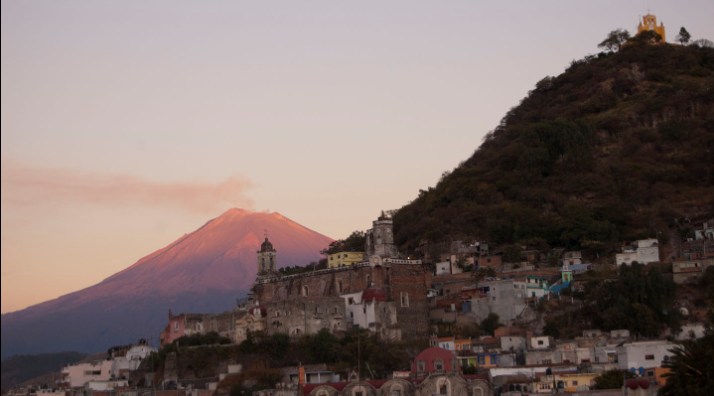 University, I have learned a lot about various sustainable opportunities and models in agriculture, business, and the environment, and it was one of the reasons this trip appealed to me. (Shameless plug - maybe, but I am inspired on a daily basis by the passion and expertise of the CSU faculty and students.)

IPODERAC has a clear emphasis on teaching all 72 boys pride in their work and promoting self-sustainability and personal value. The boys do their early morning chores in their houses, plan meals as a household, learn new skills such as teamwork and responsibility in the wood and soap workshops, and dedicate time to their school work. When one young man was asked to talk about his experience with helping to run the soap making shop, he not only went into a very detailed description of the program – but also what it meant to have the chance to live and truly be alive – a very powerful message considering his troubled background and young age. He said all this while glowing with pride and accomplishment that he was now getting the skills and education for a successful future.

It was easy to look at some of these young men and their new responsibilities and forget that they are still kids, but IPODERAC has provided many opportunities for them to play together as well. They have recently installed a turf field where the boys can play soccer and other games (and sod installation is apparently no small feat in Atlixco.) There is also a basketball court and a new playground that was dedicated a few days after we visited. Play and connection to nature is reinforced along with their responsibilities and education. When Mexico is discussed in the U.S., the term “corruption” usually enters the conversation and perhaps it is why people are hesitant to give to charities or be involved in initiatives in Mexico. And while that is unfortunately often true in many cases and situations in Mexico, it is definitely not a concern at IPODERAC. If someone gives money for a playground, they build a playground, and very nice one at that.

The trip was also during the Day of the Dead celebration, a three-day Mexican holiday to honor and celebrate loved ones who have died, which added a cultural perspective to make it an even more engaging opportunity to better understand Mexican culture. Rituals are very important in their culture and society, and especially so in death. However, this is not just the religious version of a ritual that some may have been brought up and accustomed to, but ritual as a community understanding and celebration of an individual’s life. Death is something that is openly discussed and present in the minds of those living there, but it is also experienced as a celebration of remembrance of those who have passed. 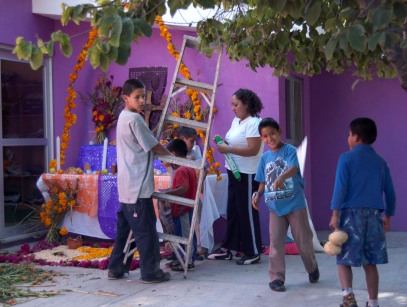 house that displayed offerings to the deceased. These children were often all too familiar with death – of their family members and of their friends who did not make it out of the situations they were living in before they came there – but they celebrated life and revered life in a way that was awe inspiring. There seemed to be a collective understanding with those I spoke with that these rituals help fulfill the needs of the soul and without them their customs and cultures would not be whole. The ceremonies and offerings become a mental marker of an event, a day or a place, and a remembrance they want to carry with them. Rituals can remind one what is important and provide a sense of continuity and connection to community.

There was a point at the end of the evening when all the children gathered in the round meeting place outside with a candle at each of their seats to reflect on what they had experienced and learned that evening. Then one by one the boys brought their candle forward to place in the center of the circle and state their remembrance or hope for the future. It was an almost hypnotic progression of shadows and lights all travelling to stand together as the gestalt. One boy placed his candle and said “Someday I want to know my father.” He knew he was already surrounded by his family though. These were his brothers, his friends, and his teachers, and he knew that this will always be his home no matter where his life takes him.

The children and young men at IPODERAC are lucky to have this second chance and they don’t take that lightly. But with all the institution’s accomplishments, there are many priorities still needed for future success – the most vital of those being counseling to help the boys transition to their new life and recover from their past experiences, tutors to help them truly comprehend and to catch up on what they have missed from not previously attending public school, and of course volunteers to help with everyday activities and look after the boys. Two Colorado State students have already volunteered there and had a great experience, and there are several student groups who I will be visiting with who definitely have an interest in possibly volunteering as well.

There were many wonderful experiences in Atlixco and the surrounding area, such as the kind people who warmly welcomed us into their homes and to their tables, the Day of the Dead celebrations and customs, and the vibrant life and colors of Mexico in Atlixco and the nearby city of Puebla; but IPODERAC will always be one of my most treasured memories. I was very fortunate to have to the chance to get to know my wonderful travelling companions and the devoted people at Ipoderac, and most of all, experience Mexico in a new way – as a trip of a lifetime.